Men's 1st Team win away at Frilford Heath vs BB&O

The Hertfordshire Men’s 1st Team returned to league action on Saturday 11th June 2022, with a fine away win against BB&O.  With Team Captain Joss Gosling unavailable, Phil Dormer took over the responsibilities at a sunny but blustery Frilford Heath Golf Club.

First out in the foursomes were Reis Suart and Zach little who fell behind early after losing 3 of the first 4 holes. The home pairing increased their advantage and closed out the match 6&5.

The remaining 3 matches all started in similar fashion with the opening hole halved, Hertfordshire winning the 2nd and BB&O immediately striking back by taking the tricky par 3 4th hole, to leave all matches evenly poised.

Match 2 was looking like another point for the home side as they held a 2-up advantage, deep into the back 9. However, the Hertfordshire pairing of George Ackerman & Connor O’Brien struck back with an eagle on the 15th following a magnificent approach shot to 8 feet by George.  Connor secured the hole with a solid putt, and the momentum swing continued as they squared the match on the 16th.  Both closing holes were halved, and the point was shared.

Phil Dormer and Luke Colgate were playing in match 3 and took a stranglehold on the match on the front 9. Another eagle, this time converted by Phil on the 8th hole saw them approach the turn 4 up before closing out an impressive victory by 5 & 4.

The final match of the morning was a closer affair, but one in which Sam Caney & Robert Holden were never behind. Reaching the turn ahead by 1 hole, a solid run of pars was eventually enough to secure another point with a 2 & 1 victory.

As the players rested and had lunch, Hertfordshire held a slender 2 ½ - 1 ½ advantage ahead of the afternoon singles matches.

The expected BB&O fightback started in the 2 opening matches with both Reis & Zach beaten by 2 & 1.

The Hertfordshire middle order then swung the advantage back to the away side with 3 successive and decisive points.  First Sam cruised to a 3 & 2 victory, Robert then continued his impressive 100% win rate for the side winning 1 up, before Connor completed the trio of victories by a 2 & 1 margin.

With 1 point required to seal the overall match result, it appeared that George would close out his match after holding a strong advantage at the turn.  However, an incredible fightback swung the match in BB&O’s favour with the match finishing 2 up to the home player.

With Phil trailing in match 8 and eventually losing 2 & 1, it was Luke Colgate who took the congratulations from his teammates. After losing the opening hole after finding water, a relentless run of consistent golf was easily enough to close out his match by 5 & 3. 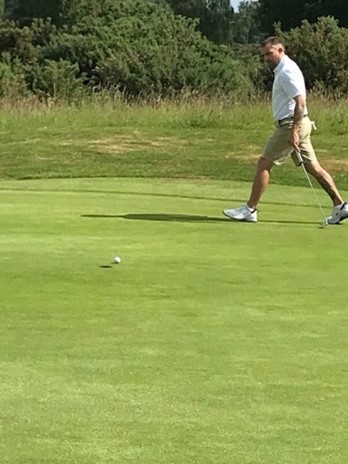