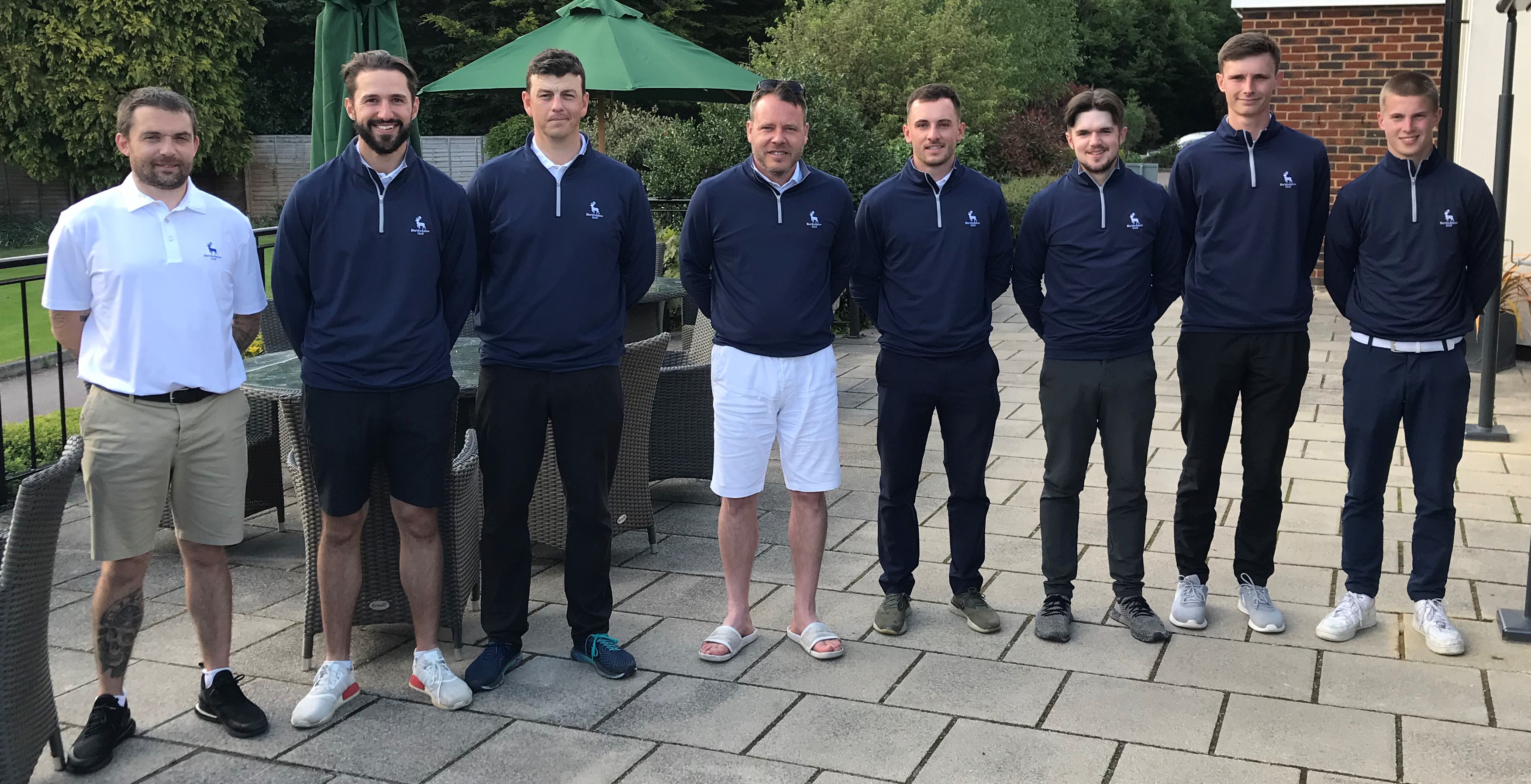 The Hertfordshire Men’s First Team started their league campaign on Sunday 8th May with a home match vs Essex played at Letchworth Golf Club. The opposition were the 2021 divisional winners and the match was reverting to a 36-hole event following the Covid restrictions over the last 2 years.  The match was played in perfect Spring conditions with blue skies and a gentle breeze so good scoring was anticipated. The Hertfordshire team were led by new Captain Joss Gosling who skippered the side for the first time.

First out in the foursomes were Connor O’Brien & Sam Caney who were matched against Andrew May & Baillee Curran for the away side. In a tightly contested match, it was Essex that scored the first point of the day with a 2 & 1 victory.

Captain Joss was next out in match 2 and was partnered by Max Hopkins, fresh from his recent win at the Hampshire Hog tournament. Another close match ensued but this time it was the home side who completed a win on the 18th green with a 2-up margin.

The outcome of the final match of the morning play was proving difficult to predict with neither team able to take a stranglehold on the match. With the score level after 15 holes the home team of Reis Suart and George Ackerman were safely on the green after 3 shots on the par 5 16th hole.  With their opponents also having played 3 but lying in thick rough, an advantage for Hertfordshire looked likely. However, an outrageous chip in scored a birdie and a missed birdie attempt from Reis saw Essex go 1 up with just 2 to play.

With Essex saving par with a 15ft putt on the 17th, the match moved to the 18th hole with Hertfordshire requiring a win to halve the match.  With Reis’ approach coming up just short of the long par 4, it was George who played a magnificent chip to within 1ft to secure a par. Their opponents were only able to make bogey so it was ½ point for each side. Therefore, going into the lunch break, Essex held a 2 ½ - 1 ½ advantage.

The afternoon singles saw Max Hopkins starting first and despite chipping in on the 18th, he was unable to salvage his match, eventually losing 1 down. The strong Essex side then took the overall match away from the hosts by also winning the next 3 matches.

Despite being ahead early in his match, Reis was beaten 3&2 by the impressive Baillee Curran. In match 3 and despite being 4 down after 7 holes, Connor clawed his way back into his match before a costly 3-putt on the 17th gave the advantage to his opponent who secured a 1 up victory on the 18th. The 4th match saw some of the days finest play with Sam 3 under par at the turn, but 1 down in his match. More birdies for the away side on the back 9 was enough for the visitors to win the match 3&2.

It was team Captain that registered the first points of the afternoon with a fine chip in on the last hole salvaging a ½ point.  In match 6, Zach Little faced a succession of birdies from his opponent early in the round and was 4 down after just 5 holes. A stirring comeback was halted on the 12th after Zach’s eagle was matched by the Essex side, but the comeback resumed with a ½ point the reward for a brilliant and battling performance.

Hertfordshire then rallied and comfortably won points in matches 7 & 8. First, George Ackerman made 3 birdies in 4 holes around the turn to take a healthy lead into the closing holes and triumphed 4 &3.  Finally, Phil Dormer birdied the 9th to take a slender advantage into the back 9 before going 2 up on the 11th. The margin was back to 1 up until Phil birdied the 15th and an exquisite approach to the par 5 16th, resulted in an eagle and a 3&2 victory.

So, a defeat in the seasons opening match, but high praise must be given to a strong Essex side who were deserved winners.