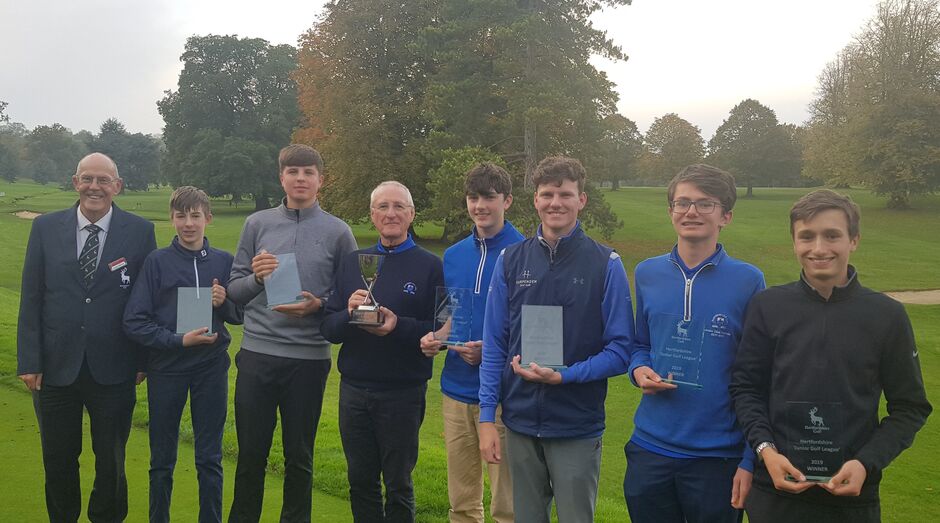 A very early but bright (due to the hour change), start was the order of the day for the Hertfordshire Junior Golf League Finals Day held at East Herts Golf Club on Monday of the Autumn half term.

Nine teams of six players qualified from the pool ranks to contest both the League Finals, played between Harpenden and home club East Herts and the remaining seven teams who competed for the ‘Team Stableford Championship’.

The Finals, a ‘four ball better ball’ match play competition teed off the 1st tee at 9.00am for 18 holes of golf. The match flowed first one way and then the other with East Herts having the early success with their home course advantage however, Harpenden, having lost the Ver league Finals to Knebworth the day before definitely felt they had a point to prove and pushed back so after 18 holes the match was tied. The first group then went back down the Par 5 first fairway in a sudden death playoff. This was halved in five so onto to the Par 3 second hole, where Harpenden were able to take advantage with a birdie and win the League on the 20th hole.

Meanwhile, seven teams of six players teed off from the 7th tee in a best five from six scores team stableford competition. The winning team was Enfield Oaks with 175 combined points 4 ahead of the second placed Essendon. (Results link below)

East Herts catering staff laid on a fabulous roast chicken dinner with chocolate brownie and ice cream to finish which went down very well with the hungry juniors.

The Club Captain, Mr James Sleigh, gave an excellent welcome speech and the official thank you speech was made by the President of Hertfordshire Golf Reverend Hugh Wikner. Following the presentation of a lot of glassware (!) The Junior Captain of Harpenden GC Ethan Maeer made a speech thanking the catering and green keeping staff which was certainly very well deserved.

A huge thank you to Alex McDonald the GM and her staff plus all the club members for allowing the competition to be played on the beautiful East Herts Golf Course.

Finally, congratulations to the 2019 League winners Harpenden and to the runners up East Herts.

Congratulations to all those players who managed to set their ‘bar’ at an achievable height and managed a personal best on the day. 😊 MK

There are no competitions currently scheduled
MORE